Anime shows first surged in popularity around the 1980s, but did not reach mainstream media until the 2010s. Nowadays, you can find clips, gifs and posts everywhere on social media about anime. With that being said, let’s find out the top 10 most hyped anime to watch! For this list we’ll be looking at new anime shows that have yet to be released and new seasons of established hyped anime.

If you want to see hyped anime 2022, you can download this with ZEUS so you can watch the new anime, and keep up to date with the latest trends. It’s an awesome third-party tool that you should try!

Download ZEUS now by clicking the button below and enjoy streaming!

ZEUS is a great software that can get you any shows you like. You can download videos or screen record any anime show by using the copy and paste method or screen recording method. Add your own customizations.

1. The Rising Of The Shield Hero Season 2 Isekai is a popular trope in anime. One of the most popular isekai anime series is The Rising of The Shield Hero. Their second season will premiere in April 2022. With the previous release date of October 2021 being post-poned, fans are excited for this light novel anime adaptation continuation. The journey of Naofumi Iwatani began when he was summoned into a parallel world to become one of the Cardinal Heroes. Dragon Ball is definitely an anime that everyone knows. Whether you’ve watched the anime, read the manga or just existed, Dragon Ball is considered one of the original action anime. With the major feature film being released on April 22nd in Japan, fans are ecstatic to see their favorite fighter Goku back in action. Dark fantasies have been sneaking it’s way into mainstream anime for quite some time. The best example is Made in Abyss, a sci-fi anime series that premiered in 2017. With the critically acclaimed season 1, people have high hopes for Season 2 which will be released some time in 2022. The story is about Riko, an orphan who lives in the Belchero Orphanage in the town of Orth. She’s determined to find her mother and ventures off into the Abyss, a giant hole that descends deep into the earth. The art style of Mob Psycho 100 doesn’t convey messages of popular or hyped up anime, but the supernatural comedy will surprise you. The moment you watch the show in it’s full glory, you’ll find yourself getting attached to Shigeo “Mob” Kageyama. His amazing psychic powers and how he tries to get rid of ghosts and spirits will have you reeling. With the confirmation of season 3 that will be released in 2022, avid fans are excited to laugh at this show.

What would make a family interesting? If you made them all have secret dangerous lives! Spy X Family is a massively popular manga series created by Tatsuya Endo. The manga gained a huge following soon after its release in 2019, and now with the anime airing on April 2022, it’s safe to say that this anime will become a huge success. A spy requiring a faux family as a front formally marries a woman and adopts a pink-haired child. However, his new family is not what it seems. His wife leads a secret life of an assassin and his new daughter can read minds. Hilarity ensues as this family dynamic takes a twist. With season 1 being a hit, it’s no surprise that Jujutsu Kaisen Season 2 is one of the most anticipated anime shows. The story follows Itadori, a highschooler who swallows a demon’s finger and becomes a vessel for said demon. With his ability to not perish at the fact he swallowed a demon finger, he is taken to a school dedicated to teaching jujutsu sorcerers. The release of season 2 is yet to be announced. 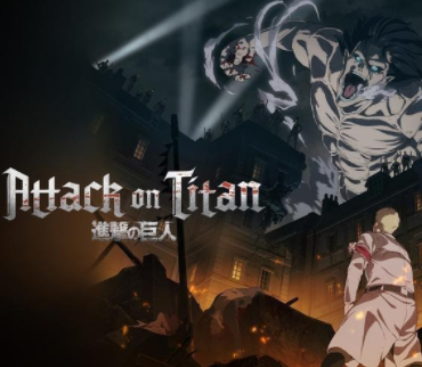 If you look up any bad main protagonist lists, you’ll find Eren Jaeger on it. He is constantly getting kidnapped and saved in every arc, but that all changes when the timeskip happens. Attack On Titan Season 4 has made shocking reveals and different plot twists that will leave fans questioning the author’s intention. If you haven’t watched Attack on Titan. The story follows Eren, a resident of Eldia who lives behind the walls that protects them from man-eating titans. With his desire for freedom, Eren becomes a soldier and he’s determined to destroy all his enemies. Part 2 episodes began it’s release in January 2022. MAPPA are considered gods of animation, and with them handling Chainsaw Man, expectations are at an all time high. The manga is written and illustrated by Tatsuki Fujimoto. The story is about Denji, an errand boy who lives a miserable life. He dreams of living a happier life and wishes to die in the arms of a beautiful girl. In order to achieve this he becomes a ruthless cutting machine and performs dangerous work, hence the name chainsaw man. This show has yet to have a release date, but it will likely be late 2022. Sports anime have made popular headlines when Haikyuu! was released. With Blue Lock, you can finally feed your sports anime craving. Muneyuki Kaneshiro and Yusuke Nomura wrote and illustrated the manga of the same name. The anime series will premiere in 2022 with no specific month announced yet. Teenager Isagi Yoichi dreams of becoming the greatest striker of the Japanese football team. He’s invited in a confidential football project called “Blue Lock”, along with 299 other strikers there this will decide the best striker in the world. Interested?

Bleach has somehow stayed on a steady course of anime adaptations. Even though it encountered a cancellation in March 2012, the final season will conclude the story of Ichigo Kurosaki this 2022. This series started with a highschooler becoming a substitute soul reaper in order to protect his family, as a result he made friends within soul society and continued to be a substitute soul reaper to protect everyone. Ichigo never really had any other motivations either than being a good friend. So new old fans are happy to hear that the anime is finally ending.

Using your PC browser, open your streaming site and load up the show. Copy the video URL located at the top website address bar. Launch your ZEUS application, Paste the copied video URL by clicking the “Paste URL” button under the “Download” menu. The video will then be processed for downloading. You will see it added automatically in the “Downloading” tab. 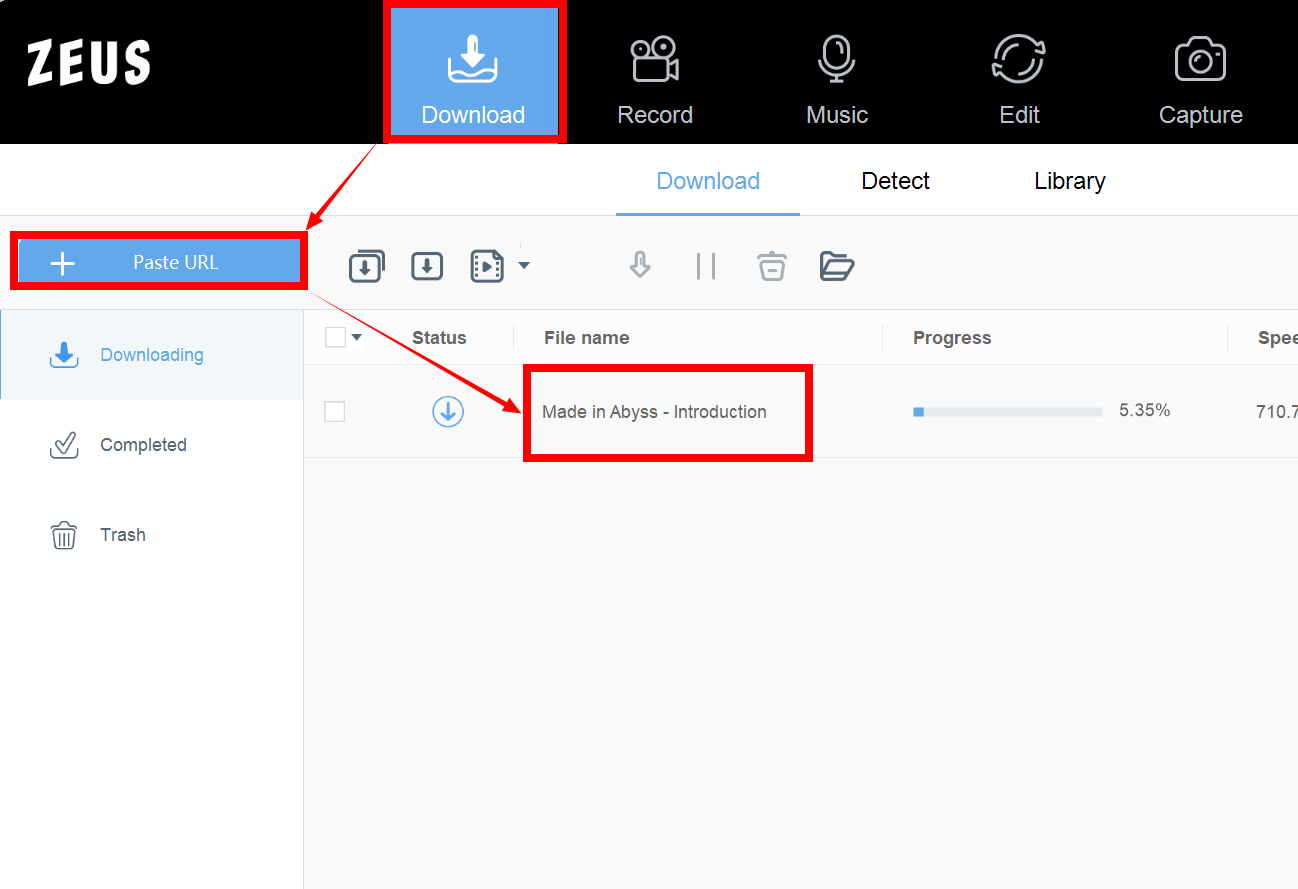 After the downloading process is complete, go to the “Completed” tab to check the download. Right-click the video file to see more options. 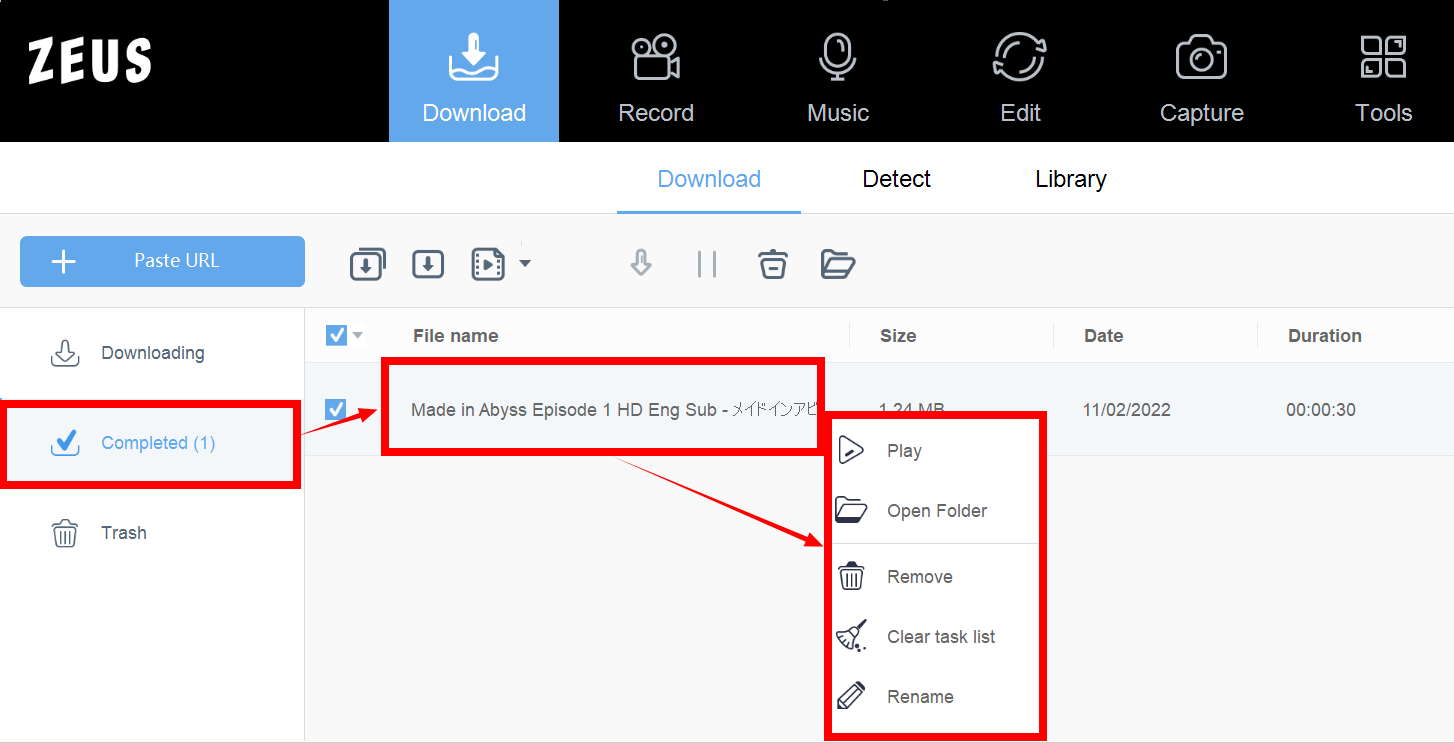 Open your streaming site, and load your Power Rangers Movie for clear and smooth recording. Pause the video so you can be ready to play it when it’s time to record. Go to the Record tab in your ZEUS software, and click the “Audio Input Dropdown” button. Select the “System Sound” to avoid external noises from recording. 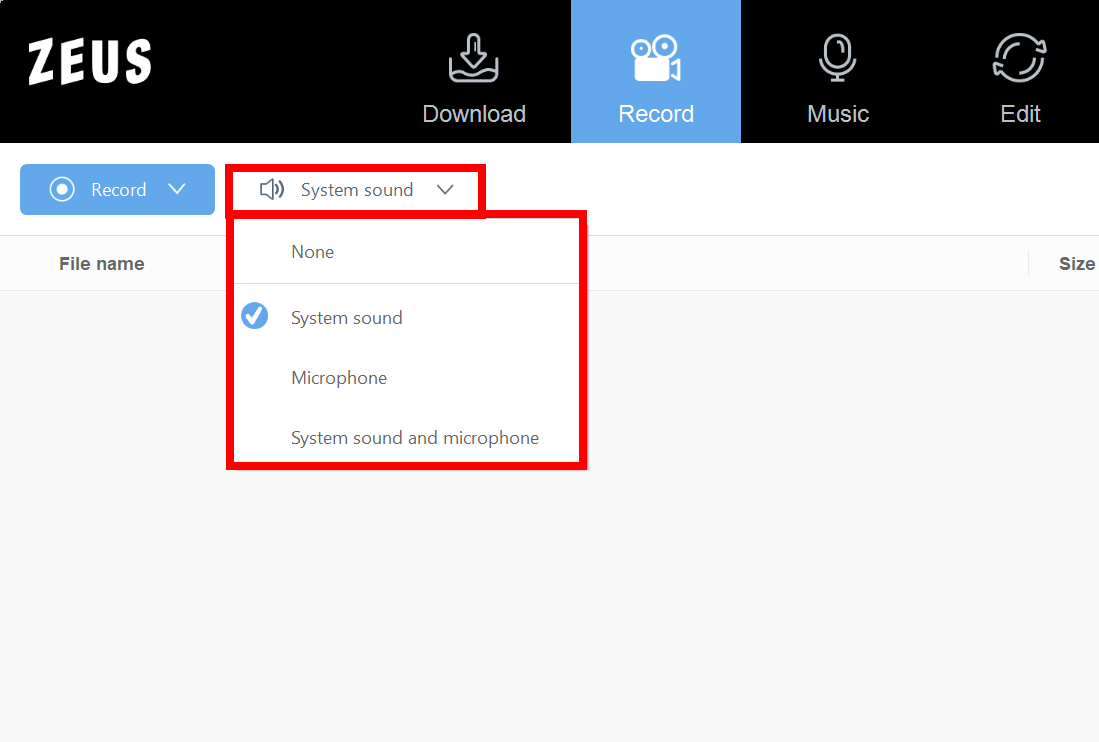 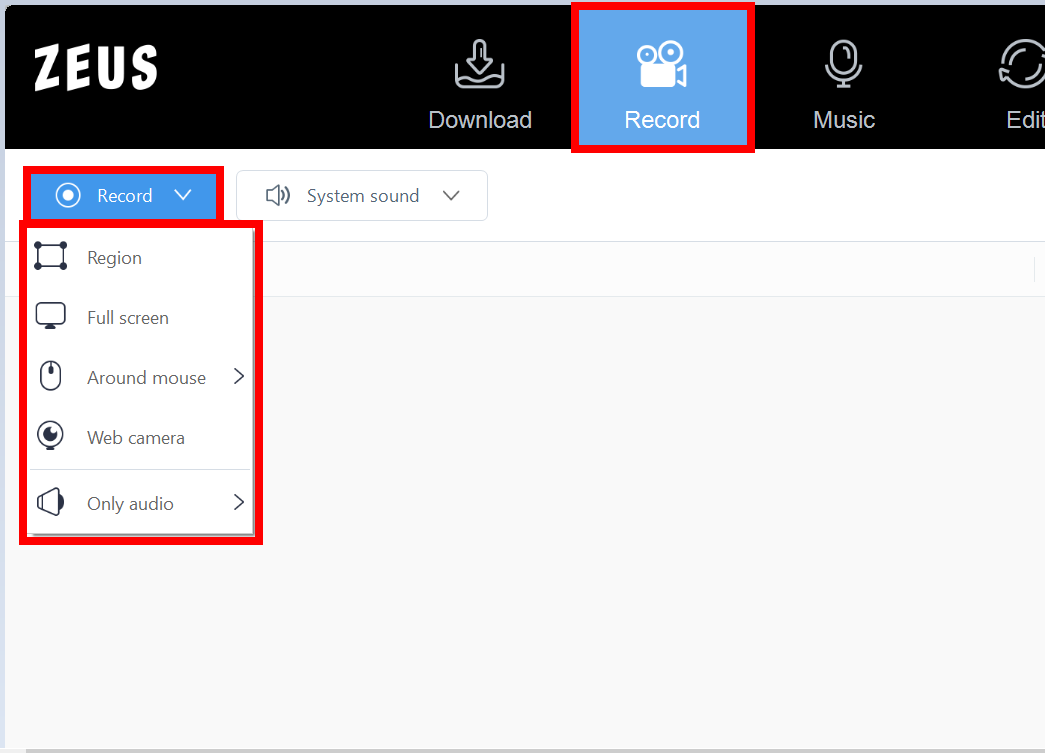 After the countdown, a small box of recording options will pop up. Click pause or stop if necessary. If you’re doing a full screen record you can use the Ctrl + Alt + E to display/hide the recording toolbar.

Once the recording is done, the recorded file will automatically be added to your record list. Right-click the video to see more options available such as Play, Remove selected, Clear task list, Rename or Open the folder. Select “Open the folder” to check and open the file. 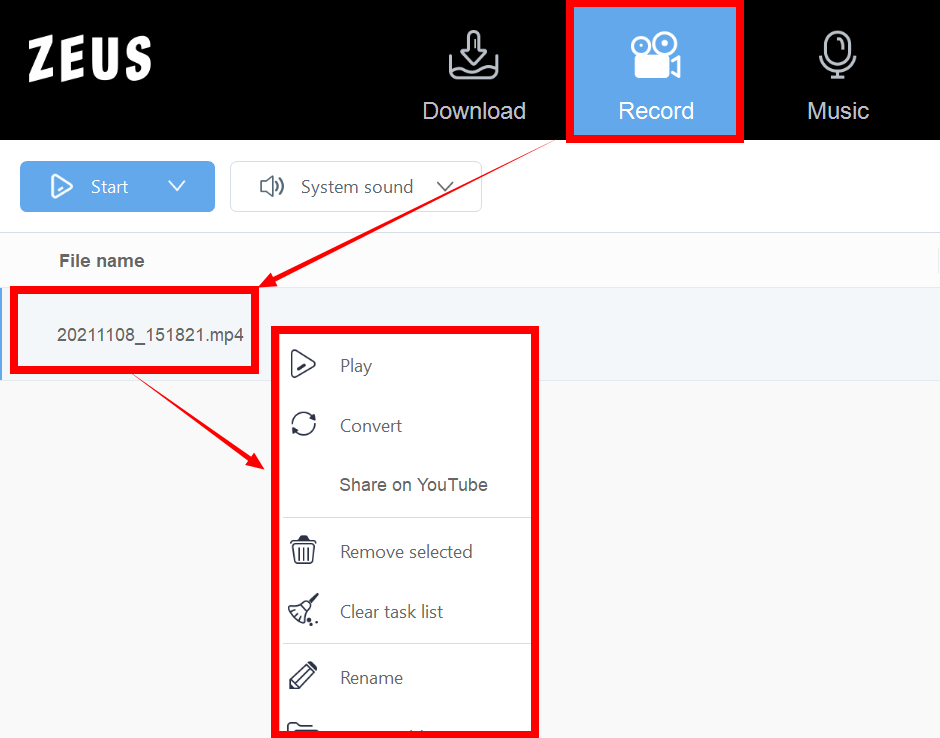 Anime will always be a great source of entertainment. Which hyped anime are you excited for? Are you looking for a cute anime like Spy X Family or do you want something dark like Made in Abyss. Are you waiting for Attack on Titan’s final episode? Download hyped anime? with ZEUS to get with the latest trends.

ZEUS is a beginner-friendly software where you can download videos by links or embedded browsers through a copy and paste method or auto-detection. You can also screen record and convert video and audio files for editing or personal use. It’s the number one all around downloader available!